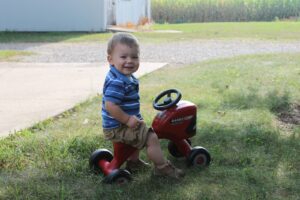 I spent yesterday listening to farmers and those who work in agriculture share their stories of using the technology of now.  We met for 3 hours at ISU Campus in Ames Iowa.  This was the first mini State of Now Conference.  Last April was the 2nd State of Now Conference in Des Moines and many topics are covered: education, business, agriculture, media, arts and more.  It was apparent then we needed to have some breakout sessions that drilled down into one area.  Agriculture was chosen to be first.

Anytime you can get Monsanto, Pioneer and Latham Hi-Tech Seeds in the same room and no one ends up wrestling is a good day.  One of the persistent messages of the day was for Ag people to start talking about Ag with a uniform voice.  Not that every message has to be the same – it isn’t – but that we all have a place in agriculture, it’s a matter of choice.

Several bloggers were on board and shared their message.  Val Plagge spoke about being clear, concise and simple – and to have a plan.  Don’t expect miracles either – work on your blog and start to follow other blogs as well.  Katie Olthoff followed with the message to talk not only to other ag people on your blog, but to those who are interested in some of the same things you are.

Education was also covered.  Stacy Noe from ISU spoke as well.  She talked about how her students were entrepreneurs and interns and how this next generation thinks differently.

Agriculture is a business and social media are tools that can be used in a good business.  Shannon Latham talked about putting social media into your marketing mix.  Darcy Maulsby talked about mixing it up, and use the tools!   Heather Lilienthal stressed the usefulness of teamwork and trying new things.  All of them mentioned that you can mix up virtual and reality, and that you should.  Shannon took her kids to Washington DC and she was very excited to show them the pandas at the national zoo.  But both kids were underwhelmed.  They were saying “Really mom?  We’ve already seen this.  We did reports at school on it.”  That’s when Shannon realized that to her young kids, virtual was reality.

Farmers are leading the way in mobile.  Jeff Caldwell gave some statistics that prove this.  Katy Flint listed off several apps that farmers are using every day.

Laura Nugyen quoted Einstein and laid out the steps for moving forward with the technology of now.  Not suprisingly, these steps work for all areas of life, not just agriculture.

Michael Libbie shared the value of using twitter.  He also emphasized the importance of having rural broadband, that we are doing a disservice to our kids education without it.

Story telling was a theme that weaved throughout the day.  The importance of telling your part of the story of agriculture, how marketing can tell stories that people will remember, how its important to share your personal history and let us not forget where we came from.  Emily Pritchard shared about Fred Hoiberg and Fred Hoiboar. Janice Person told the story of Monsanto donating a bag of sweet corn seed to someone in North Dakota and they grew that corn and gave the sweet corn to local food banks.  People’s lives were changed.

Our speakers traveled from near and far.  Abby White came from Kansas, Janice Person traveled here from St. Louis (via North Dakota), April Hemmes rushed back from Uganda to be here.  Emily Pritchard came from Minneapolis.  The rest of the speakers were from all over Iowa.  And they were brilliant, insightful, entertaining and worth the trip to Ames to see.  People in the audience were young and old.  Farmers and media and interested students.  Diverse.

It was indeed a fine, large day.

(The videos are being loaded this weekend … start with Larry Sailer athttp://youtu.be/vnOKhmAoSKE)