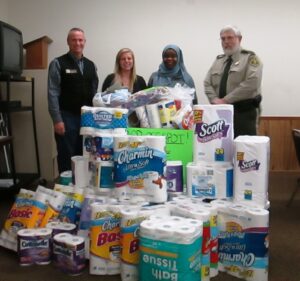 Greater Franklin County Chamber of Commerce kicked of the Buy One Product Local Campaign in January of 2012.  They encouraged all the residents of Greater Franklin County to buy one product locally, and suggested they start with toilet paper.  Why does this campaign work? Because toilet paper is something everyone can relate to. The toilet paper figures were turned into relatable discussion items like providing jobs for family and friends, keeping local stores’ doors open and providing tax dollars for local projects. Asking our community to buy local when purchasing something as basic as toilet paper has helped to create awareness of the benefits of buying local not just for toilet paper, but other items as well.

January 21 was Martin Luther King Jr. Day of Service. Two high school seniors, Demi Monaghan and Nasra Nasser wanted to do something to give back.  They contact the Chamber and asked if they could help with the Buy One Product Local Campaign.  Demi and Nasser set up shopping carts at locations around the community asking residents to donate toilet paper.  They put up posters as well.  Sheriff Larry Richtsmeier and his dad before him have been making wooden toys for an organization call Camp Courageous.  The Camp is always in need of items, and toilet paper is one of them.  The Sheriff promised to get the toilet paper delivered if the girls could get the toilet paper collected.

There were 594 rolls of toilet paper collected!  Also donated were several quilts, hats, gloves and clothing items.  The community was asked to buy the toilet paper locally, and leave the receipt with their name and number on it.  The Greater Franklin County Chamber of Commerce donated three prizes: $100 in Chamber Bucks, $50 in Chamber Bucks and $20 in Chamber Bucks.  Demi and Nasra drew the winners and they are: $100 Shirley McIntosh; $50 Charlene Richtsmeier and $20 E.J. Christensen.

Demi Monaghan will be attending University of Northern Iowa in the fall.  She recently met her college roommate who is majoring in special education and told her about Camp Courageous.  “Because I told her about the Camp, she called and is now volunteering there this summer! “said Demi.  Nasra Nasser is returning Tanzania in June and completing 12th grade and will attend college in China for a medical degree.

How does this article become a Small Biz Friday post?  Because every store that sells toilet paper in Hampton contributed to this campaign.  They advertised, facebooked, tweeted, gave away and participated.  That is what small towns do.