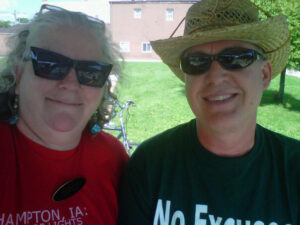 Nonstop prattle — that’s the description I got for color commentary.

Wikipedia defines it as “The color commentator provides expert analysis and background information, such as statistics, strategy and injury reports on the teams and athletes, and occasionally light humor.”

Last night Rick Janssen and I were the color commentators for the Franklin County Fair Parade. We did give background information, light humor, foreground information, reminded the kids to stay out of the street, did our Public Radio and Race Day imitations — and just had a great time.

How did this all come about?

Scott Sackville said in a meeting he thought announcers at the parade would be fun.  Rick volunteered.  I thought it would be a good time, so I volunteered also.  The Chamber set up the dais, chairs, table and speaker system.  Rick and I sat on the dais, under a tent cover and talked for two hours straight.  We played well off each other.  I hope there was enough information for the listeners.  Parade entrants could hear us and we got a lot of thumbs up.

What does this have to do with marketing?

Simple: if you can’t be in the parade, do something at the parade. Small community parades are a great way to promote your business. Pat Palmer offers 10% off to everyone who takes a picture of him and his van in the parade.  Post it on facebook and you get your 10% off.  Not everyone in a small community is on facebook.  But dang near all of them come to the local summer parade.  Participate in the live event – then bring the reviews and stories online for all to read.

I couldn’t be in the parade – no float, car or idea for one.  I sure could announce it though!  It didn’t cost me anything to do that.  I bet if you went to your local chamber and gave them the idea to set up speakers on a busy corner and announce the parade, they’d jump at the idea.  See – we also talked about the Bandshell Renovation Project, Summer Fest, Hollydazzle, HACCers Open and everything else going on in town.