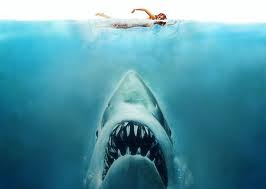 The year was 1975 and I was in college.  My folks came to visit for the weekend and we went to the movies.  Jaws was the feature presentation. I almost lost my leg that night.  The part of the movie where the sound track starts with da DUM da DUM da DUM  and the shark jumps out the water and eats half the guy?  My dad, all 260 pounds of him, hollers (that’s yells) “JESUS F**KING CHRIST!” and grabs my knee so tight I almost fainted.  Junior (dad) never went out to another movie in his life. 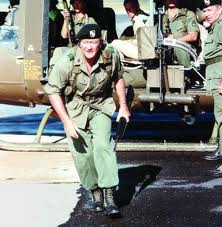 Mind you, the one he saw before that was the Green Berets with John Wayne. In fact, that was the first movie I ever saw in a movie theatre. The whole family went.  The year was 1968 and I was 13 years old.  We sat in the back row of the Windsor Theatre, my two brothers, mother, me and dad.  At 13, that was extremely embarrassing – sitting with my family.  But once that rope trap opened up and swung the guy into the tree and he was stabbed with bamboo spikes – I was kinda glad to be sitting next to Jr. 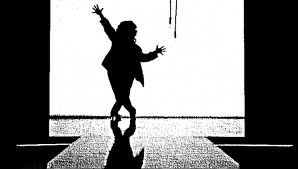 1983 found me all grown up and living in Chicago.  I was a bartender and loved my job!  On our days off, we often went to the movies.  Flashdance came out and of course we went.  After the movie, it was off to the bar.  One of the songs from the movie came on the jukebox and I was trying very hard to dance like the girl in the movie did.  I had a slouch tshirt on (where one shoulder is  exposed) and a purple miniskirt.  Somehow in the midst of a kick and twirl I jumped up and my leg hit the bar! Hard.  So hard I thought I broke it.  I limped for weeks.  But what a great movie!

One year later, Purple Rain came out.  Who didn’t love Prince in the 80’s?  Cruz and I headed downtown Chicago to see the premiere.  We sat about half way back in the middle and anxiously awaited the advent of our favorite musician.  The minute the movie started, EVERYONE in the theatre started whooping and hollering and talking.  And they did it almost the entire way through.  It was very hard to hear the music!  I don’t know what possessed those people, but good Lord they were full of it that day.  As it turns out, I saw the movie years later, it didn’t matter what the actors were saying – it wasn’t very good.  But oh, the music!

These days I still go to the theatre – I support our local movie theatre, a non-profit, and buy popcorn too.  Every so often, we’ll catch a good movie.  However, nothing stands out in my memory like it used to (old age?). 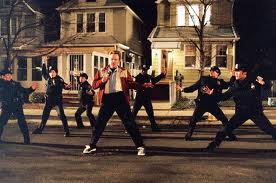 Except … Romance and Cigarettes.  I had friends over to my house and we watched it on Netflix.  The beauty of that is the power of rewind.  I don’t think I’ve laughed that hard in ages!  Christopher Walken dancing and singing the song Delilah — how could this be a bad movie?  I recommend everyone who reads this take the time to watch this movie.

Do you have any recommendations for me?