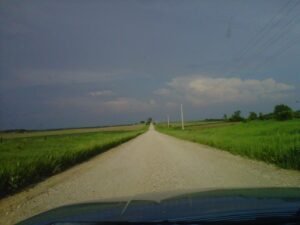 Let’s clear up a few things first.  What is broadband?  According to www.broadband.gov:

The term broadband commonly refers to high-speed Internet access that is always on and faster than the traditional dial-up access.

How is broadband different from dial-up service?

Now – how is the growth of broadband in ag areas coming along?

Depends on who you ask.

Many farmers use smart phones.  They check the markets, tweet their news, update facebook – all while driving a tractor.  (Don’t worry, during harvest season lots of combines are on autopilot until you get to the end of the row.)  Satellites have made it possible to receive information faster than ever before.  We’ve got cell phone towers all over the place.  Having said that – there are still many ‘dead’ areas where phones won’t work.  At all.  Mostly it’s a grove of trees causing the problem, or low lying fields.  Sometimes it’s because you’re too far away from a tower.

I drive to Mason City at least once a week, and I know all three spots along the way where I can’t be on the phone – because I’ll get dropped.  But everyone knows those spots – and you just don’t call people!  We adapt.

There are many people that live in the country that are use providers like Wild Blue.  They are available almost anywhere. ( I could not get them at my family’s farm – because the farm was at the bottom of a hill and they said I would not get service.  Yeah, I don’t get it either.)  They don’t work with VOIP and live interactive gaming – wildblue.com says “latency will have a noticeable effect on performance over the WildBlue network, as it would on any satellite delivered service.”   They also have a fair access policy; if you exceed it they slow you down to a crawl.

Then there’s HughesNet.  They have download allowances ranging between 250 mb and 450 mb.  From their website: To ensure fair Internet access for all HughesNet® subscribers, Hughes maintains a Fair Access Policy. This policy establishes an equitable balance in Internet access for all HughesNet subscribers. Hughes assigns a download threshold to each service plan that limits the amount of data that may be continuously downloaded within specified time periods. Subscribers who exceed this limit will experience a temporary reduction of speed.

I used them at the farm, because that is all that was available.  It meant no live streaming (ack! No 140 character conferences), no watching Hulu or any tv online – it meant paying very close attention to what I was doing online.  My friend Deb Keller uses them (because she has to) and it’s very frustrating.  “When the kids are home, we can’t all be on our computers.  Because we go over the limit and HughesNet slows us down to slower than dial up.”  That’s right – they intentionally slow your service to a crawl.

Living in town, small or large urban area, you don’t even consider internet speed.  It’s a given.  Sure, sometimes Mediacom has problems – but it’s usually not a big deal.  I’m with Qwest (they have a new name – Century Link) and have no complaints whatsoever.  However, neither of these companies service rural farm areas.  We are told it’s too costly to provide the necessary equipment to get there.

So, yes, we can get higher speed of data transmission.  Most people in rural areas are limited to the quantity of this data transmission because of ‘fair access policies’.  Forget streaming media, VOIP, live gaming and interactive services – those run you out of allowed downloads.  If you live too far away from cell phone towers, you are SOL too.

It’s better … but we aren’t anywhere near equal yet.