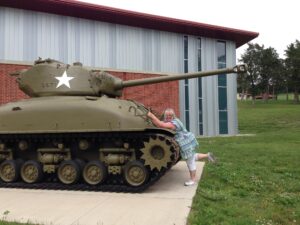 Wednesday the ESGR folks invited local businesses to come to Camp Dodge and see what our National Guard soldiers do every day.  They are the Employer Support of Guard and Reserve people and their budget comes from the Department of Defense.  It’s money well spent.  We have a need for employees in Iowa and they have soldiers who will soon need work.  We learned of their dedication to our country, their skills learned in training and in real life in battle, the special training they receive in communications, IT, CNC milling and lathing, automotive and truck mechanics, and more.

And we got to play. I said from the get go I wanted to drive a tank and Jacob Pulis wanted to run the guns.  He did get to be gunner on a Bradley and I got to drive the Bradley – in simulation.  What I learned: the steering is very touchy and I drove all over the road; I drive better on the sand; when we ran out of bullets we could run over the bad guys and kill them; and I now have a deep respect for those soldiers who put their life on the line every day. 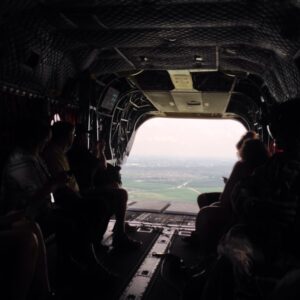 Riding in a Chinook

Another highlight was riding in the Chinook helicopter. They keep the back end partially open so you can see out the back.  The seats are like old fashioned camp cots with seatbelts.  There’s padding on the walls and there are side windows.  It’s designed for troop movement, artillery placement and battlefield resupply. It’s top speed is 196 mph (we didn’t go that fast) and take off and landing were a dream.  The views over the greater Des Moines area were a real treat indeed.

Another highlight of the day was rolling a humvee.  It was a real humvee, there were four of us inside and buckled up and 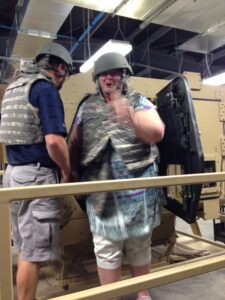 We rolled that puppy and walked out!

when we were upside they stopped the simulation and said “Egress Egress” which means get out.  Imagine hanging upside down by your seatbelt trying to figure out how to land gently on your head and turn around to get out.  To top it off only 1 of the 4 doors was unlocked.  I fell on my head (it’s ok) and into the gunner opening – which meant I was standing up!  Jake was in front of me and he came around and opened my door because I had no idea where the latch was.  He then scrambled out and I more slowly scrambled out behind him.  I’ve got a few battle bruises and a invisible badge of honor that says “I survived!” 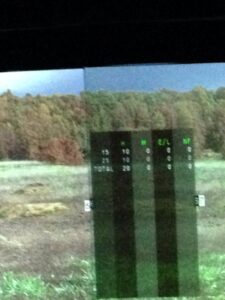 After realizing that I was not the large machinery driver I thought I was and rolling a humvee and not moving out as fast as I wanted I was treated to a real surprise.  We went into a shooting simulation and I got a perfect score!  20 out of 20 — I killed all the bad guys in my lane.  At last something I was good at!  My apologies to all my friends who are knowledgeable about guns but I have no idea what my weapon was.  I know it looked like a machine gun with a clip in it and it was a single shot at a time gun and it was kinda heavy.  The scope was good and I made perfect shots.  Jacob said I could join him and his family at the Isaak Walton shooting range anytime I wanted too!  His wife is great shot as well!

It was a great day and a wonderful exposure to what these guys and girls do to support and maintain our freedoms. If you are interested in hiring a hero, start with this link and then contact me and I’ll put you in touch with the people who can help you more!