I spent a morning at KQWC this week.  You can find them online at www.kqradio.com  It’s the station to listen to for local news presented by Pat Powers.  Pat gave me a tour of the building and its exactly what you’d think a radio station would look like: offices, microphones, equipment and happy people. 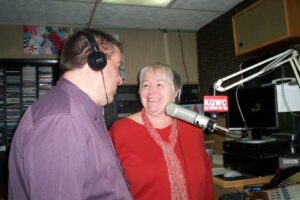 Woody and I on the air

Then I went on the air with Woody on The Flight.  Woody throws out tidbits of information, plays some rockin’ music and generally has a great time in the morning.  He dreams about music and wakes up to play it.  He interviews people and asks some pretty crazy questions.  You just never know what you’ll get with Woody.  Lucky for me I was ready for him.

I was introduced to the community on the air and shared a little about my background.  Raised in Iowa, 30 years in Chicago, back to care for elderly parents and inbetween all of that I became a geek too.  We talked about events and activities the Chamber was going to do.  Then Woody asked me if I was going to keep the event Ladies Night Out.  It’s a great shopping event and lots of fun and of course we are going to keep it!  Woody then said “what about the guys? We want a guys night out!”

Fortunately my brain was firing on all cylinders and I responded “Great idea! Will you be on that committee?”

Woody said yes.  So now we’re going to have a guys night out.  I think it will involve beer, cars, racing, sports and we’ll showcase chamber businesses that have those things.  We still need a few people on the committee!  Mike from Critter Nation said he’d be on the committee.  Are you interested?  Just call me at the Chamber, 515-832-2564 or email deb@visitwebstercityiowa.com

(the title of the blog post is a throw back to Robin Williams and Good Morning Vietnam!)