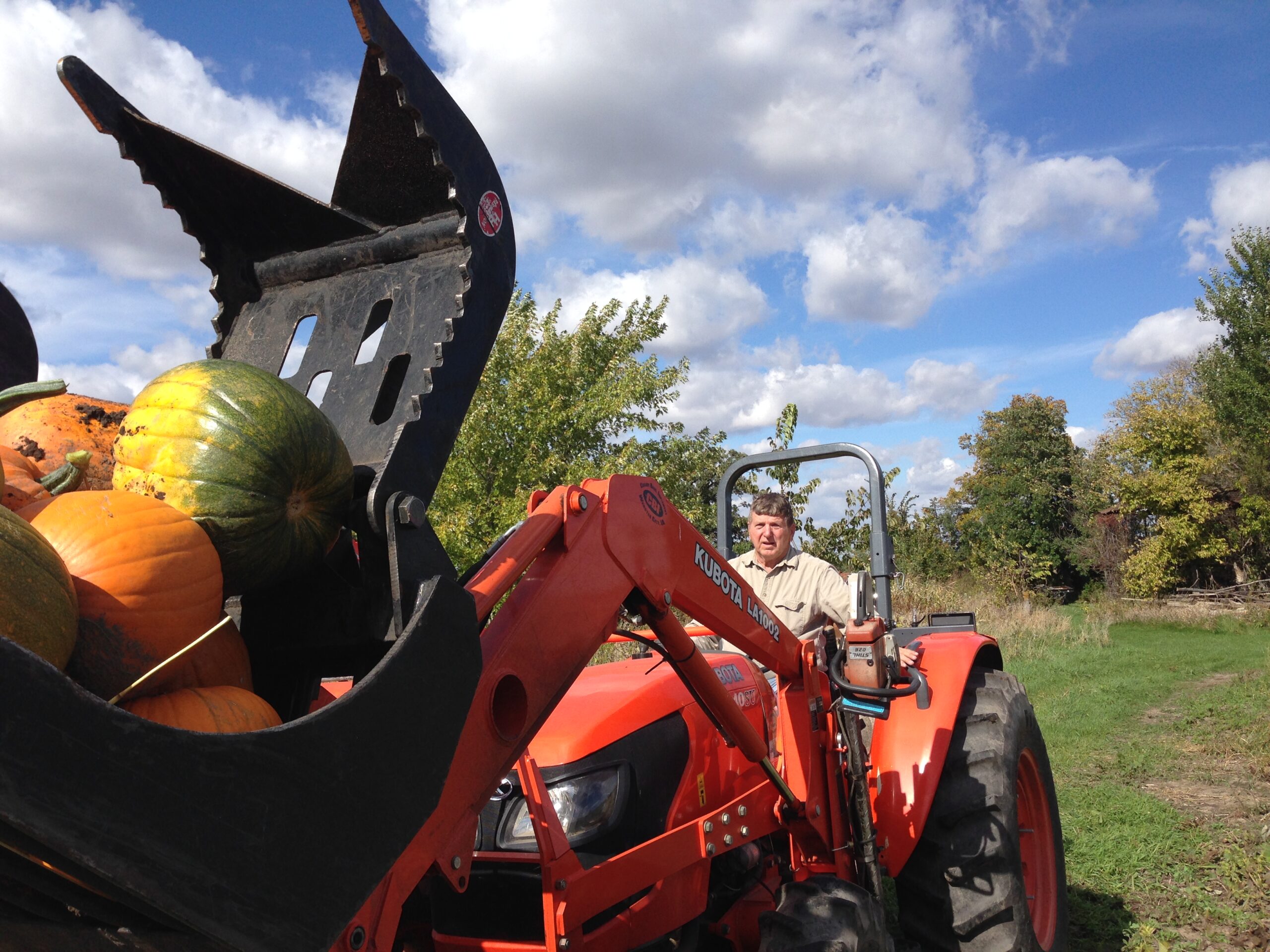 Last Monday I spent an hour out at Brandup’s Timber.  Mike had some pumpkins he was donating to the Chamber if we came out and picked them.  I also got to see the CRP ground (Conservation Reserve Program) and found broom corn, bittersweet, native grasses and more.  The Brandup’s have given back to our community, and this is their story.

The Hamilton County Conservation Board is proud to proclaim its newest public wildlife management area that will be known as “Brandrup’s Timber”. The story of this land and its designation as public land begins with Mike and Pat Brandrup and their story of the lands journey.

“The land we call our farm was once part of the Native American culture, owned by no one and shared by all, and sustained for centuries.   In 1803 the United States government acquired the land as part of the Louisiana Purchase.

According to the land abstracts, our farm was deeded from the federal government to a private individual in the 1854, and has been owned by numerious individual and families. During the 160 years that followed in private ownership, there were many changes on the land. It went from native prairie and timber to a subsistence farm, to a cattle farm, and eventually to present day row crop farm. Prairies were converted to farm land, timber was cleared, wetlands were drained, and the farm produced crops and income to support generations of landowners and farm families. Each time the land changed ownership the new owner would do what they could to “increase the productivity” of the land. 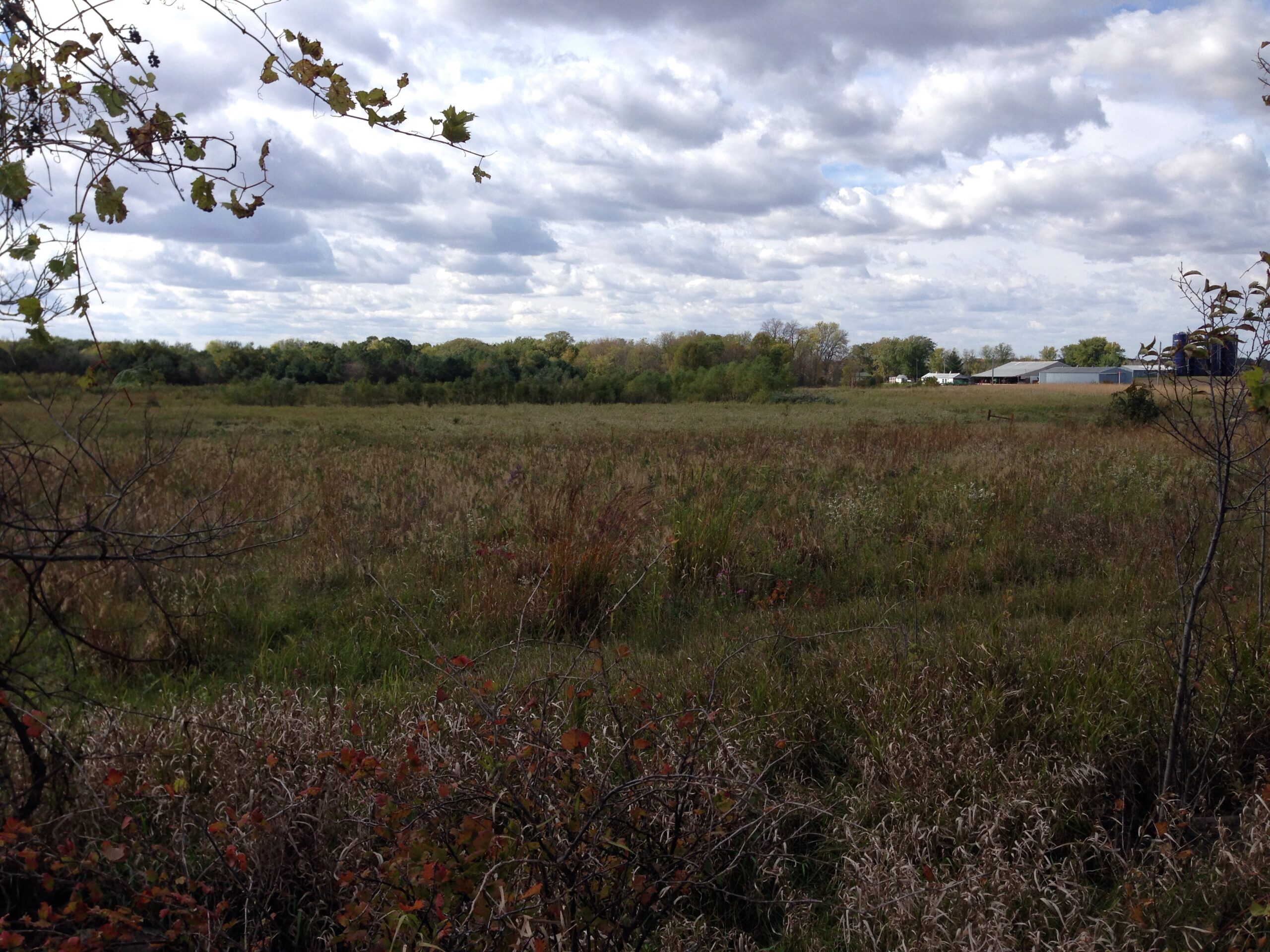 My grandparents started to acquire the land in the late 1930’s and our family has owned the land since. It is this land that taught me the work ethic of agriculture, instilled the life long passion for hunting and fishing, and the marvel of nature that guided me into a career in forestry and natural resource management. It is this land that has provided the resources to help sustain five generations of Brandrup’s.

As my wife Pat and I began to look to the future we realized we had the opportunity to do something that maybe hadn’t happened since the time of settlement, or the time the ownership of the land was granted to one person. We had the opportunity to “Give Back”, to ensure that the land could be used by everyone again, and would be managed in a sustainable manner, forever. It was important to us to take the most unique, fragile and most diverse part of the farm and ensure it would have the opportunity to return to a naturally sustainable condition. The land will once again become prairie and timber and revert back to its original natural condition. The land will not have to be plowed, tilled, sprayed, or fertilized to produce commodity crops. After 160 years the land can look to a well-deserved retirement. We wanted to know that the land would be there for all future generations. By getting the land into public ownership we could be sure the land would always be there and always be protected, and people, both present and future generations, would always have the opportunity to use, enjoy, and learn from the land. It is our way of helping to give the land a naturally sustainable future and a way of “giving back” to the land and showing the appreciation and reverence it truly deserves. A way of protecting the land forever.

This land was once part of the culture of the people who lived on the land but never owned it. Hopefully by “giving back”, we can begin to recreate a culture that once again treats the land with respect and dignity and belongs to everyone. Once again, the land will enhance water quality rather than contribute to the problem. 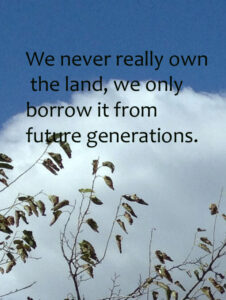 The story doesn’t stop here. Pat and I could not have done this by ourselves. It is also about partnerships, shared visions, and dedication of conservation minded organizations. specifically, the Hamilton County Conservation Board, Iowa Natural Heritage Foundation, Hamilton County Pheasants Forever, The National Wild Turkey Federation, Eagle Grove and Little Wall Lake Chapters of White Tails Unlimited, and the Iowa Department of Natural Resources Wildlife Habitat Stamp Fund. The opportunity to “Give Back” wouldn’t have happened without their help, support and shared visions for the future of everyone.”

The old quote, attributed to the Native Americans, sums things up well; “We never really own the land we only borrow it from future generations”

“Brandrup’s Timber” is 112 acres in size and is comprised of native timber, restored prairie grasses and wetland. It is located 3 miles north of Webster City on White Fox Road and 1 mile west on 190th Street. The area will be open for public use including hunting; large and upland game along with waterfowl, hiking, bird viewing and other outdoor recreational activities. Directional signs along with area boundary signs and a parking lot will be installed in 2014. A public dedication ceremony is also being planned for the near future. For more information, contact Hamilton County Conservation at 515-832-9570 or visit www.mycountyparks.com