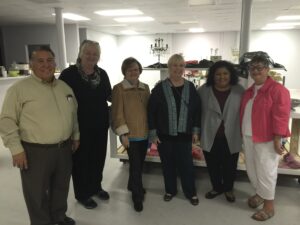 Someone has to be first.  It takes a brave person, or group of persons to step up to the plate and say “We’ll go first.  We believe in this town.  We think our business idea is sound and we want to open a business here.”

The first group of folks got together and opened up a shop called The Heart of Eloy Store, located where else – in the heart of Eloy.  It’s a resale shop and they all volunteer there.  It’s been cleaned up beautifully, donations will be accepted and items are then sold.

Mark Benner, the Chamber Director, will have a full report for us soon.  I was lucky to have a sneak peek before they were even open and the mayor and city councilwoman came out for a visit!

So before they’ve even hosted their tour, one of the buildings slated to be on the tour has already been taken off because there is a business in it.  This is the best kind of news to share.

Mark will keep in touch and update us quarterly on the progress of Eloy.  They are scheduled to have their tour in April – we look forward to hearing how it’s going!