State of Now/140Conf12: From Disenfranchised to Empowered, Part Two

I was witness to two days of speaking truth to power, to sharing stories of marginalization that opened all the floodgates of the heart, to a gut wrenching time of bringing power out of pain.  The State of Now/140 Character Conference NYC 2012 made these incredible stories of transformation heard around the world. 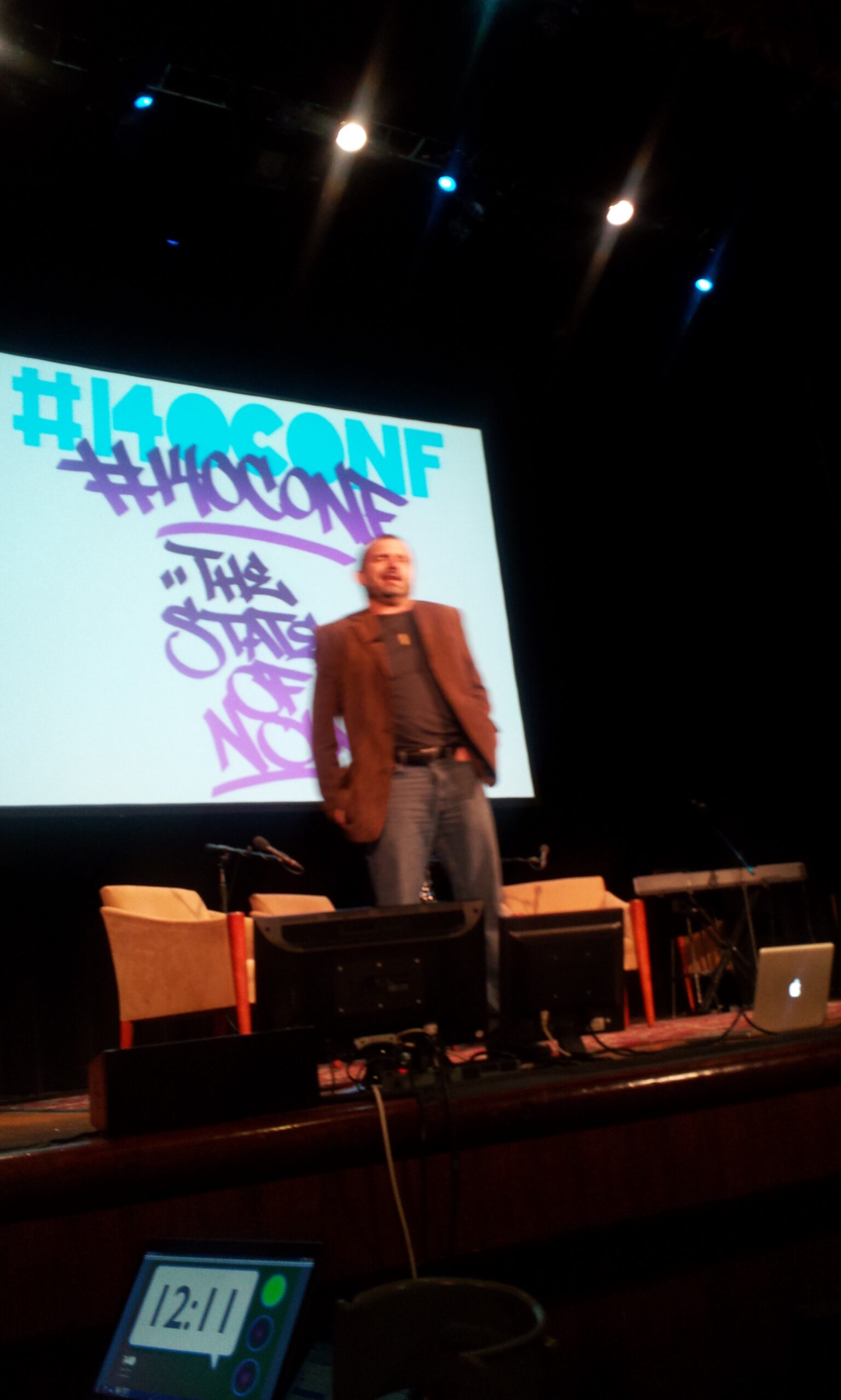 Kevin Honeycutt,@kevinhoneycutt, just another kid from the trailer court, stormed the stage and showed us what is possible in education for our kids.  Kevin has taught in schools and seen kids that light up when they come face to face with technology.  When you learn to play guitar you build up calluses on your fingers — and it involves having blisters first.  What if you were able to take an iPad and make it into a guitar? What if that kid could really learn to play guitar on the iPad, miss the blisters, and create beautiful music?  What else can that kid learn?  What does that kind of learning open up for that child?  Anything, ANYTHING is possible.  Kevin brought that point home with the entire audience hooting and hollering all along the way. 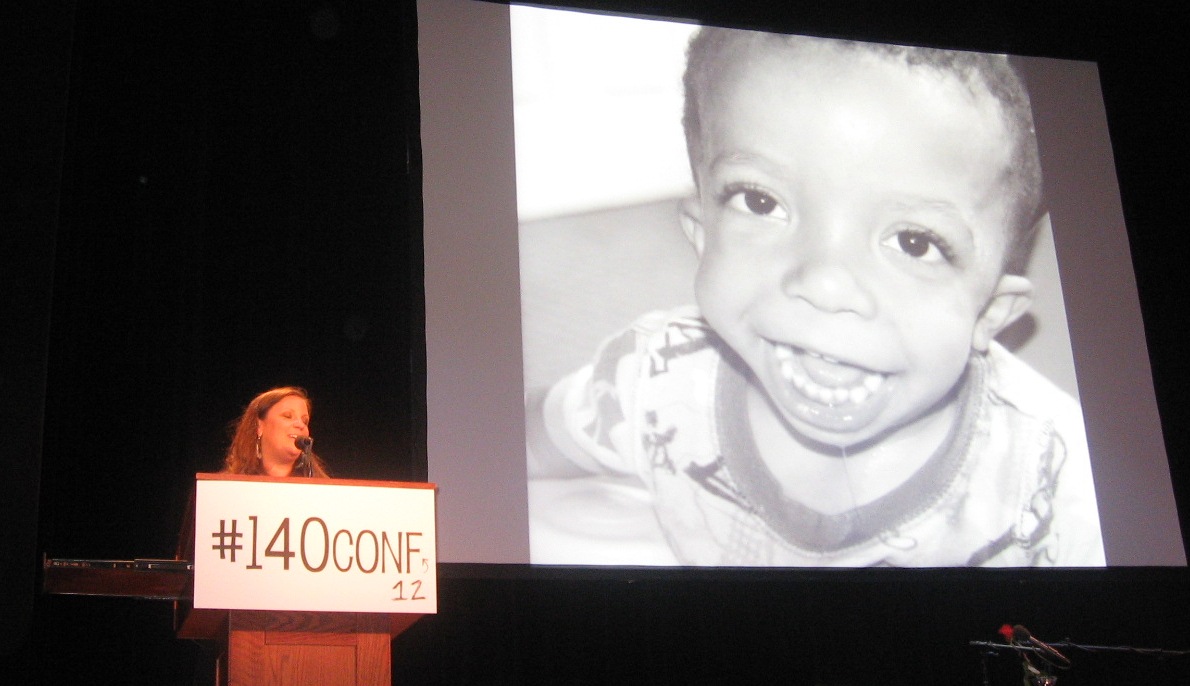 Heather Hamilton, @tjzmommy, got on stage and talked about her son Zach who died.  First of all, I don’t believe I could ever have that kind of conversation with a room full of people.  She told Zach’s story with aplomb and verve.  No one in that room had a dry eye.  Everyone fell in love with Zach – and how could you not?  He was a sweet kid and cute as a button.  But Heather’s story didn’t end with Zach’s death.  Heather is a prolific blogger and had shared Zach’s journey and his love of Elmo.  After his death, people started changing their avatars to look like Elmo, sharing Heather and Paul’s grief in just a small way.  The hospital Zach spent so much time in wanted to honor Zach and build an Elmo room for other kids who needed help.  They needed $25,000 to make that happen.  It was raised in just a short time.  But the story doesn’t end there.  Sesame Street had Elmo make a video that mentions Zach and it is now shown in Zach’s room.  Yeah – I left the room crying … and blown away by a woman who took an unbelievable grief and created an amazing tribute. 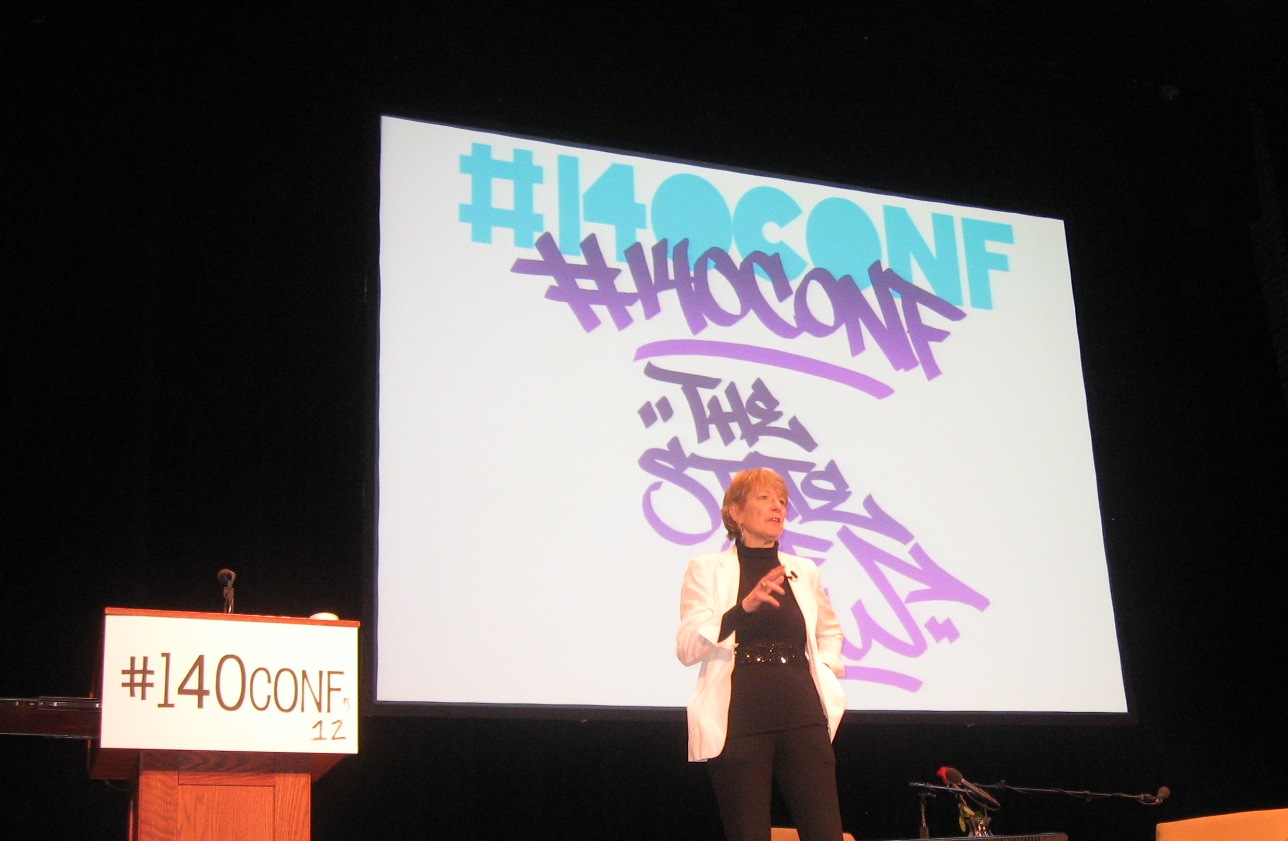 Liz Strauss, @lizstrauss, is well known on the speaker circuit and better known for SOBCON.  Having learned at her bar owning father’s knee how to tell a good story, she didn’t fail to keep our attention.  Liz talked about being the youngest kid in her family and her next oldest brother was 8 years older than her.  It was that brother that trained her to answer him when he whistled.  That’s right, he trained her to come to him like a dog would go to his master on his whistle.  Talk about having no power and even less respect!  Liz commands a stage with her over 6 foot, thin as a bean pole appearance.  Even more powerful is her quiet voice, almost a whisper.  I felt encouraged by her story of overcoming obstacles, but I also had the great fortune to share a loft with Liz during this stay in New York.  Spending time discussing many topics over dinner, or while sitting on the couch or around the kitchen table is just one of the benefits of being involved in this conference.  As I work on my business, I’ve gotten new ideas of directions to go in – from sharing a minute or two over breakfast.  Thanks Liz! 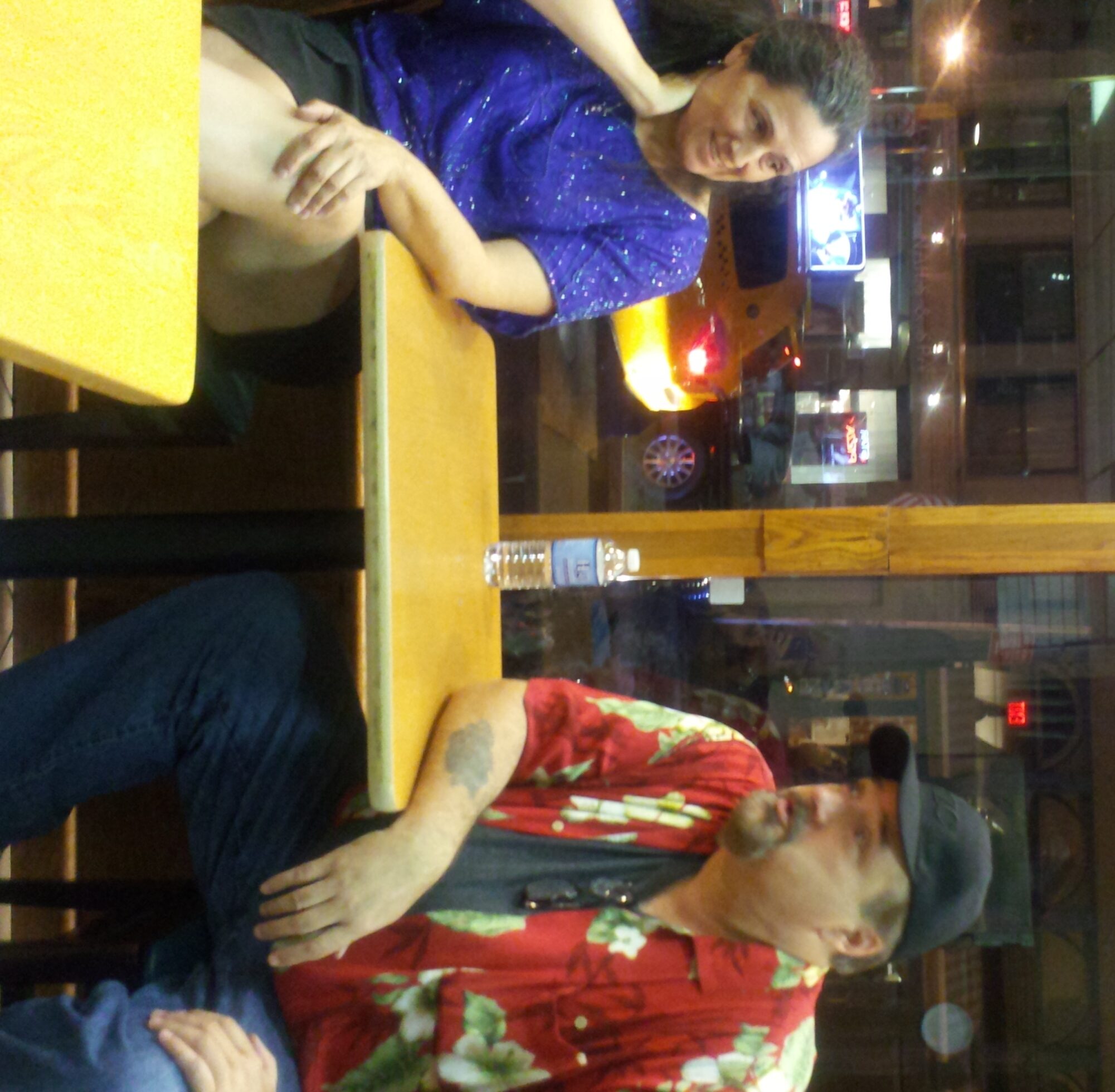 Andy Dixon, @andydixn, and his lovely wife came across my radar over a slice of pizza after the speakers cocktail party at Brick. A small group of us were hungry and headed to the nearest pizza place a block away.  It was a dive, and only two other people were there.  We spread out and shared a little about ourselves.  Andy was born and raised in the Uptown area of Chicago.  His grandfather and father both served time in prison and it was assumed that Andy probably would too.  He grew up as a punk, gangbanging hillbilly on the north side of Chicago.  I asked him if he was ever afraid.  He said “Fear?  He was my first cousin, I lived with him every day.“  As expected, Andy got arrested and sentenced to a lot of years in prison.  One day a group of his boys and him were planning on kniving another inmate when he made the decision “I’m done.”  He told his boys no more, and they said ok, sit this one out.  He explained he meant NO MORE EVER.  He was done living this life.  Either they would kill him, or leave him alone.  With the help of a priest, he began reading about nonviolent lifestyles.  Books by Deepak Chopra and Rumi.  And finally, with the help of his wife Linda (who he met in prison – a story for another day) he was released.  Andy now tells his story and does his best to help those who have walked in his shoes.  This is a man who had no faith, no belief in himself as a good human being, no desire to change.  He made a decision that changed his life, literally. 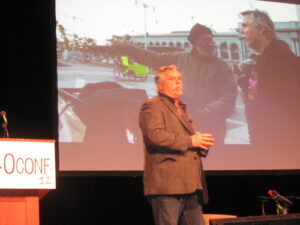 I met Mark Horvath, @hardlynormal, last year.  He’s an advocate for the homeless and a true humanitarian.  I can’t watch Mark talk without crying.  This is a man that is passionate about creating a better world for the homeless.  The loft we were staying in was in Spanish Harlem, directly next to a park.  The owner told us that yes, homeless men gathered there – but if you opened the window and listened to their conversation you would hear them discussing current events.  I told that to Mark and he immediately wanted to know where they were, when they were there and wanted to video their stories.  Mark literally lights up when he tells the stories of the people he has met.  We were talking after the Twittamentary screening.  I asked him what he did on an average day.  That’s when I learned that Mark works part time at a homeless shelter to support his work, and that in the past two months only $10 has been donated to his cause.  WHAT?  Not that there is anything wrong with Mark working at a shelter — the sadness comes from the fact that people are not giving to support his cause.  Mark asked listeners to help support his cause at http://invisiblepeople.tv so he can continue to tell the stories and find ways to end homelessness. 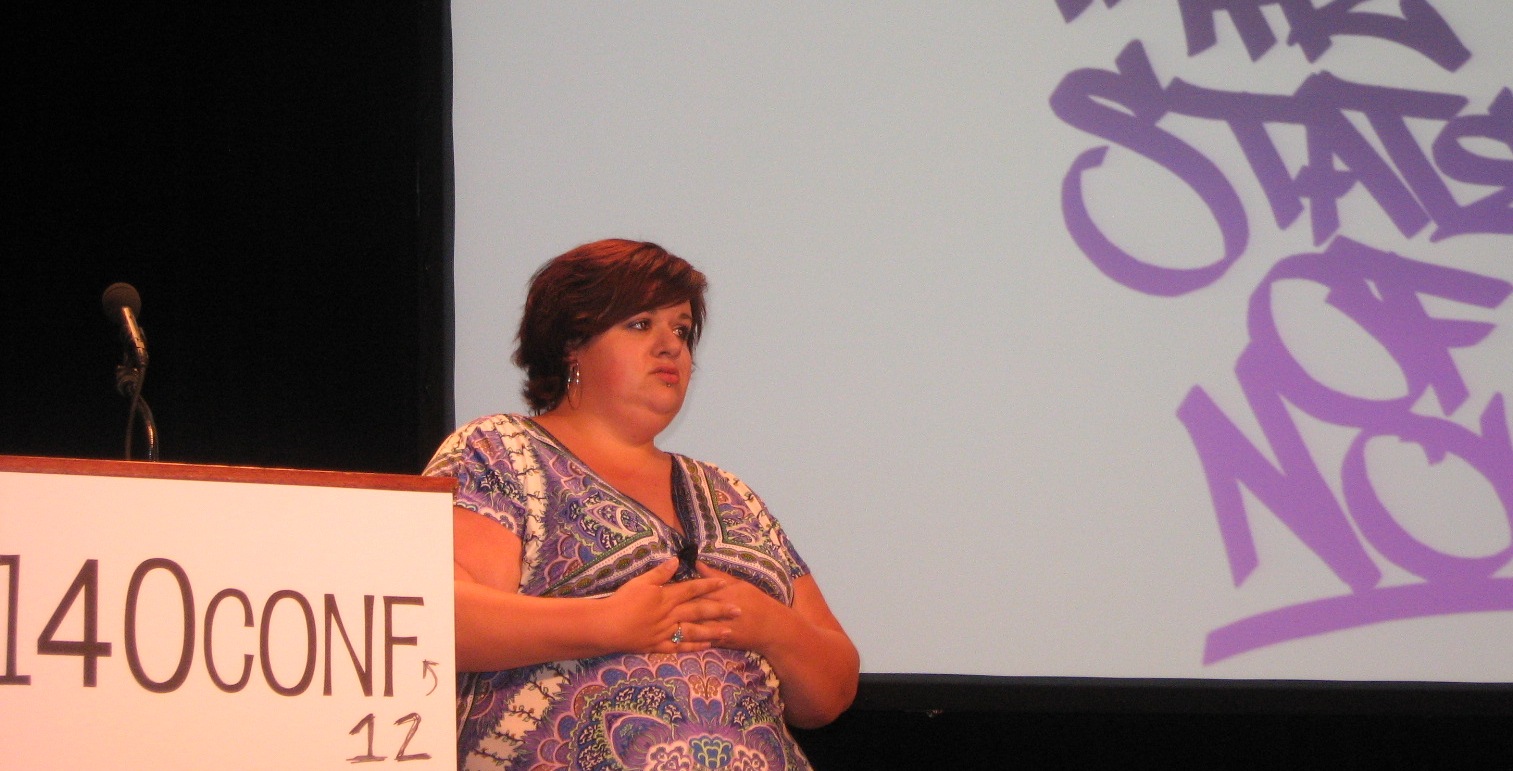 Jodi Sonoda,@karmicevolution, stays scared.  She’s anxious most of the time.  She suffers from a mental illness, anxiety disorder.  Life for her is often just trying to figure out how to get out of the house without dissolving into tears.  She lives on a fixed income, has learned how to stretch a dollar until it hollers and always, always, always reaches out to her friends with love.  Life has not been easy for Jodi, it’s hard being scared all the time.  Yet God has given her an incredible gift.  She can sing like an angel.  Her personal them is “let it be” and she sang that song, on stage, in New York City, in front of thousands (online and in the theatre).  This appearance by Jodi was beautiful.  But frankly, it’s her appearance on the twitter stream that has me in tears.  She has reached out to the people she met on this journey and shared encouragement, hopes and well wishes for them.  She retweets other’s story and has also written her story for all to read.  These are the kind of things that make her an amazing woman.

These were just a few of the stories told over the two days of the State of Now Conference.  I believe they show us how the technology of now has provided the means to move from disenfranchised to empowered.