Things to do during RAGBRAI when you’re in Webster City … 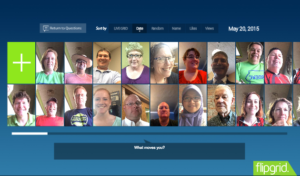 add your comments by going to http://www.visitwebstercityiowa.com/pass-through.htm

Flipgrid (you can do this right now from wherever you are!)

Flipgrid is an online application currently being used by design teams, in religious settings, in online research projects, at businesses and government offices for collaboration, at weddings, by architects, and in numerous community groups around the world. Flipgrid is used by educators, corporations, and communities to engage an audience in ongoing video conversations. Vidku, or “video haiku”, aims to take the value of Flipgrid and expand it for all to use. And they are just getting started. . .

Now imagine how this might work in small business. Webster City Chamber decided to try it out for #RideWC – RAGBRAI Pass through on July 21. We posed the question “What moves you?”

We thought we’d get a lot of answers like “my bike” or “my car”. We got a few of those, but we got more answers that give us insight into our community. “My family” and “my community” were popular. Why not watch the responses? Better yet – why not tell us what moves you? The directions are on the site, on the lower right hand side at http://www.visitwebstercityiowa.com/pass-through.htm During RAGBRAI, you’ll be able to stop at the Webster Theater and try it out for yourself. You can also look for one of the volunteers, Tiffany, carrying around an iPad – she’ll be recording answers as well.

We tested this concept out during RVTV last year and it’s been a big request for this event and upcoming events. So how does it work? Missionary Alliance Church in Blairsburg built a human size foosball game. They install it right into the street. A soccer ball is used for the foosball, and humans are used instead of pegs. So imagine the little men that twirl on the bar and kick the ball into the opposing side’s goal area. Now imagine those little pegs are actually people, grown adults. It’s a fast game, and teams come and go quickly. Look for lots of audience participation around this game!

Neighbors Heating, Cooling, Plumbing, Geothermal and Radon are bringing in Brendan Scott to do a little magic, juggling and escaping. Audiences are thrilled with the family-friendly juggling and Houdini style escapes of Brennan Scott. Filled with laughter, surprise and suspense, Brennan’s shows offer something novel and fresh.

Who do you know that can make bikes from balloons? Today’s Your Day can! Check out all the fun stuff they do with balloons. You’ll also find a cutout or two so you can get your picture taken as well.

There are many commercials on tv these days that make you shake your head and wonder what they were thinking. We’ve decided to recreate one of those commercials. There will be a large picture of mountains and a lake attached to one of our stores downtown windows. In front of the picture will be two vintage bathtubs, the claw foot kind of bathtub. These tubs were rescued from the Webster Theater second floor apartments and are believed to be of early 1900’s vintage. You’ll be able to have your picture taken in the tubs with the painting as a backdrop for only $5. Those pictures will be posted to flickr.com in an album and you can then download any size you wish and use as you desire. (These funds go to help pay for the expense of RAGBRAI as a pass through in Webster City.)

There’s a big rivalry in our town – you’re either a fan of Iowa or Iowa State. In fact, RVTV is coming back to Webster City September 10 for the third time! RVTV is where we celebrate the big game with Keith Murphy and Ed Wilson from WHO-TV. This year at RAGBRAI we will have 10 portapotties decorated in Iowa fashion and 10 decorated in Iowa State fashion. There will be a big, clear water jug at the end of each row where change/bills can be thrown in. The container with the most money collected will have bragging rights!

The Doodle Bug was a motor scooter built from 1946 to 1948 by the Beam Manufacturing Company of Webster City, Iowa. Doodle Bugs were powered by 1½ hp engines from Briggs & Stratton or Clinton. The Doodle Bug Standard Model B was the only Doodle Bug series powered by Clinton engines; one thousand or less of these were built, all during the first production run of ten thousand scooters. All other Doodle Bug scooters, including the Standard Model A that was produced alongside the Model B during the first production run, used variants of the Briggs & Stratton NP engine. Four production runs of ten thousand scooters each were built. An annual reunion of Doodle Bug owners and restorers is held in Webster City. (Thanks Wikipedia for this info.)

What you may not know is the guys involved with these scooters are passionate about it! They’ve been riding Doodlebugs for lots of years and are now also working with younger people and passing on their love of the vehicle.

Stop by for a friendly visit and find out all the information they provide around the topic of gambling prevention.

This is a parody of the legend of King Arthur who is traveling and recruiting his Knights of the Round Table. God charges them to find the Holy Grail. King Arthur and the Knights find themselves in strange places and in the presence of a cow, killer rabbits, a bevy of beautiful people and French people. These players are coming off a two week run and are happy to provide some comic relief for lots of riders!

You can take a cool break in the air conditioning at the Webster Theater and see the 1974 documentary SAGBRAI and the 2014 highlights. They will have these movies on a continuous loop.

What’s a good party without music? Hy-Vee will have a dj in their parking lot located on 2nd and Broadway. Travel two blocks east and you’ll hear the Miller Lite DJ in the First American Bank Plaza on 2nd and Des Moines. Alan the DJ will be jamming in the vicinity of Willson and 2nd Street. Bill Robb, a local favorite, will be strumming and singing down towards Superior Street on 2nd Street.

Thelma’s Ice Cream
My mom and I started making and selling our ice cream sandwiches at the Des Moines Farmers Market a couple years ago.  We use my 108-year-old grandma Thelma’s cookie recipes.  We make all the cookies from scratch and then such sweet Anderson Erickson ice cream between them.  We will be showcasing a new RAGBRAI flavor this year, apple pie a la mode, apple pie cookies with vanilla ice cream.  – Derek, owner

Webster City Lions Club
What’s better than pancakes for breakfast?  How about pancakes cooked on a big outside grill?  Take your cakes, banana and bottled water (only $5) and enjoy a hearty breakfast!

Leon’s Pizza
Breakfast pizza, hot out of the oven and only $2 a slice! We’re pretty sure Leon will have some other goodies for sale as well!

July is probably going to be pretty hot.  It is Iowa after all.  Doesn’t a frozen fruit bar sound just about perfect?  Enjoy your fruit on a stick and ice cold!  Only $3 or two for $5.

Webster City Rotary
Partner the Rotary with Webster City Custom Meats, and Fareway and you can look forward to a mouth watering treat!  Breakfast at its best – bacon, egg and cheese burrito and a drink – all for $5!  You’re Bacon Me Hungry!

Brick Gypsy
Wood fired in a brick oven – what would be good for breakfast?  We’re thinking cinnamon rolls!  It will be hot, good and different.

WC Church of Christ
Willing to walk a block or so for pie? Then wander down Des Moines Street and have a hot breakfast sandwich, homemade cinnamon rolls and/or pie!

Fire and Ice Delights
Have you heard of kettle corn?  Well what about kettle crack?  It’s just that good – you become addicted!  Add in a lemon shake up and you feel like you are outta this world.

Doesn’t your mouth just water thinking about barbeque in July? Ours too! Come try some delicious, cooked right in front of you bbq. Prime rib hash is their specialty for RAGBRAI!

Webster City Grizzlies 8U youth baseball team will be selling ice cream, pop, water, frozen candy bars – see the kids on the street and they’ll direct you to the freezers!

Off the beaten path:

Grid Iron Grill
Did you miss all the food? Grid Iron is on east edge of town and they’ll have specials all day!

Oh sweet nectar of the gods – coffee! Not to mention amazing smoothies and other delectable goodies prepared all day.