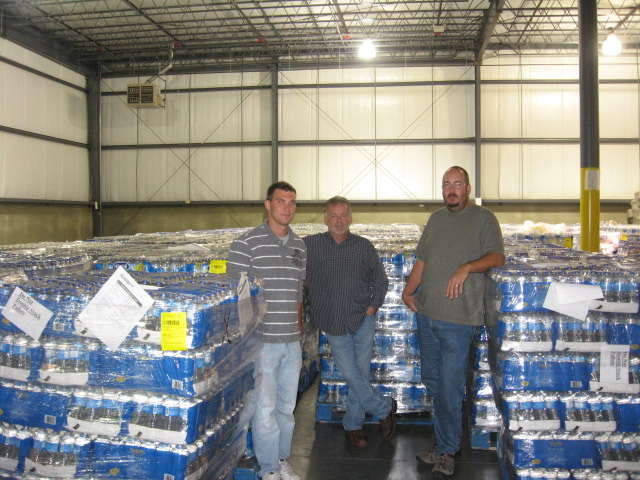 Shelene Codner ‎124 Pallets of bottled water available to non-profits, government entities, 501 c 3 organizations and municipalities – located in Ames. Will split out pallets – you do not have to take all 124 pallets.

I volunteer at the Chamber of Commerce and thought “why the hell not?”

That was September 7.  An email was sent to the Chamber’s Executive Director, Brook Boehmler.  He was on board.  Brook said “go get a couple of pallets.  Take Tim’s truck.”

We messaged Shelene who put me in touch with the City of Ames.  They were gracious and directed us to Jerry Nagle of Kid Money Trucking.  The water was being stored in a warehouse rented by Jason Gibson of Falcon Packaging.  Jerry subleases from him – and the water was actually in his area.

Let’s back track a minute.  This past summer Ames was flooded.  They could not drink their water.  The mayor kicked it into high gear and arranged for FEMA to bring in water.  Sam’s Club, Hy-Vee and many other organizations also got on board and shipped in truckloads of water.  They needed a place to store all of this water.

The Mayor contacted Ford Street Development.  They are a group of investors who own this warehouse.  They initiate programs for the betterment of the community.  Water was right up their alley.  Jason and Jerry were asked to get involved, and they gladly did so.  They handed out thousands and thousands of bottles to the Emergency Response Teams who delivered the water to the flooded areas.  People in town who were able to get to the warehouse came and got water too.  They kept an entire city of over 50,000 people hydrated during one of the worst floods in their history. 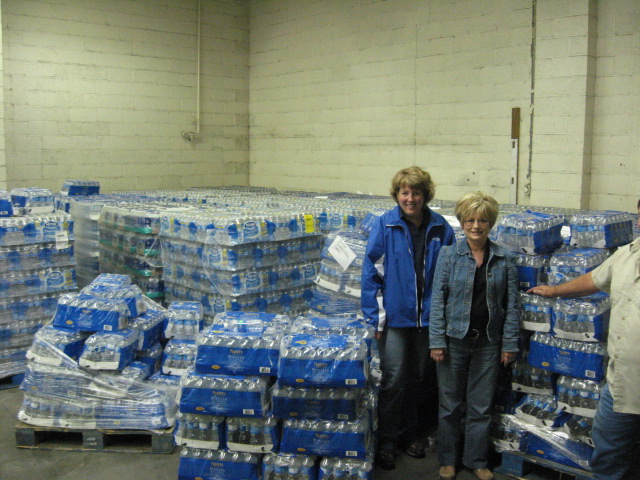 We needed more than a pickup truck!

Winfield Solutions came to our rescue.  They are a local company here in Hampton and Alan Moritz who works there is the Chamber President.  Alan said “we’ve got a truck.  We’ll send him up to fill up his truck.”  He indeed did have a truck.  It’s a 53 foot semi tractor trailer.

We headed to Ames with Rick the truck driver from Winfield Solutions, met Jerry and Jason and filled up the truck.  With 26 pallets of water.  That’s over 41,000 bottles of water!

Now what?  That’s a lot of water – what could we do with that much water?

We found out from Todd Lettow, Hampton Dumont Superintendent, that water is necessary to keep children’s brains hydrated.  It helps them perform better in school.  Dehydration can create a reduction in both mental and physical health.  Of course this shows up in the classroom! Our students need water for the brain.

With the help of Todd Lettow, Steve Lane and Darrin Strike we delivered 41,000 bottles of water to three Franklin County Iowa schools – 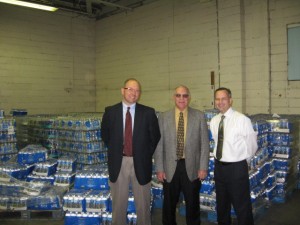 Hampton Dumont, CAL (Coulter, Alexander and Latimer) and West Fork Community Schools.  Hampton Area Chamber of Commerce supports the economic growth by improving the quality of life and business climate in the Franklin County Area.  We believe a good place to start is with our youth.

In less than one week the water stored in Ames was moved out to other places.  Here’s the list of recipients.

There are many lessons to this story.  Social media works.  Kids benefit from the charity of local businesses.  Networking creates opportunity.  People can make a difference.

I ask that you visit http://blogactionday.change.org/ Take a minute to the sign the petition.  Be one of those people that choose to make a difference. It’s a big world, and one person really can make a difference.