Iowa is Getting Younger 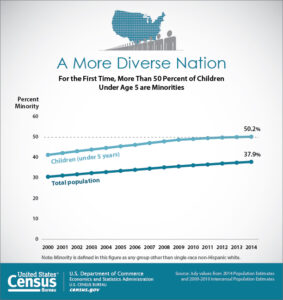 According to the US Census, in contrast to most states, five experienced a decline in median age between July 1, 2013, and July 1, 2014: North Dakota, Hawaii, Montana,Wyoming and Iowa. Millennials, or America’s youth born between 1982 and 2000, now number 83.1 million and represent more than one quarter of the nation’s population. Their size exceeds that of the 75.4 million baby boomers. *

Not only have the numbers changed for ages, the diversity in our world is increasing.  For the first time ever, over 50% of those under 5 are minorities.

This changes a lot of things, doesn’t it?  We’ve been used to the baby boomers leading the way, and now they don’t.  Also, the time of less diversity has passed.  How we’ve marketed to our communities in the past will no longer work as well.

Will you pay attention to the numbers and move with the times?