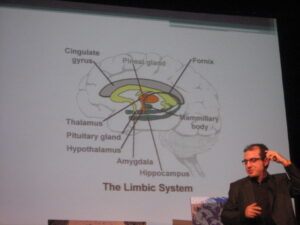 Jack Hidary is a neuroscientist. In 1995 he co-founded a little company in Iowa called Dice.  Jack was a proponent to switch NY taxi’s over to high mileage hybrids. He talked about engaging in the physical.  If you get up and move, your brain moves too.  You’ll accomplish more and do more.  But here’s the fun part … even if you are thinking about being physical, your brain is moving too! So for those of us who have some physical limitations, we can move as best as we can – and we can also think about moving.  Either way, we derive a benefit.

That’s big people – think about it. Imagine yourself walking on a beach (even though you are lying on a couch).  See the ocean lapping into your toes.  Feel your feet in the sand and take a little jog.  Your breath should be a little faster.  The sun is warm on your face and you smile – you just feel so good.  Now there.  You’ve just meditated and exercised.  You ought to feel better.

Jack said to me “it’s just neuroscience.  Everyone can do this.” Take this thought a little further.  What if you got your customers to engage in the physical? Why sit down face to face at a desk?  What if you met a client and took a little walk?  Would it not be wonderful to make them feel good?  And to associate that good feeling with a conversation with you? 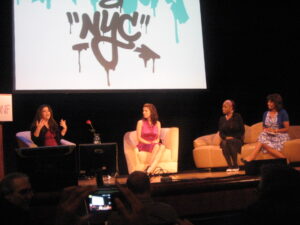 We met three women with lupus and one mother of those women.  They told their story.  They shared that anything is possible. The energy raised in the room when they talked.  The passion!  One woman said “you need to help people when they need help – not when you feel like helping them.”

I met Stephen in the 92nd St Y building – he was not at the conference.  He was using his Y membership and visiting and having a nosh.  We rode the elevator down together and he invited me for coffee. 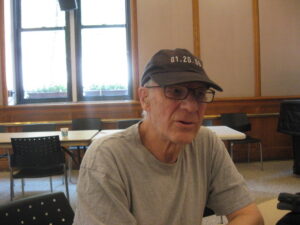 I learned that Stephen was originally from Chicago.  One day on a train he met his wife.  Shortly after that he served in Korea and came home and married her.  He finished college and moved to New York.

I asked him why he left Chicago for New York.  Stephen said “New York was my Athens, my Paris, my Rome – my mystic city.  Still is.” He wrote for the New York Times for years and today is a poet.  82 years old and one of my new heroes. 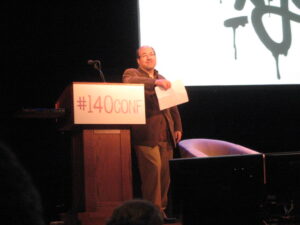 This cute little kinda bald guy in a professors jacket stood beside the podium.  He had a engaging smile.  Craig talked about the original blogger – Martin Luther.  Then there was St. Paul, an accomplished blogger and E Mailer (Epistle mail that is).

Craig said “talk to each other.  There are lots of small groups doing great things, but not talking to each other.”  Visit www.ratenonprofits.com He also said “Truth is the new black.  Like the groups you believe in, share what they say.”

By the way, Craig is the Craig from Craig’s List. 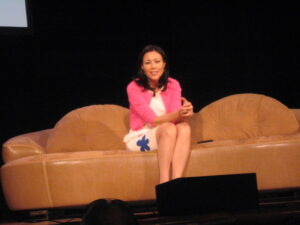 We see Ann on the Today Show.  She’s a journalist and a news reporter.  A matter of fact, soft spoken woman on TV.  How invigorating to see her in a different element.  She imitated her mother giving her grief about her attire and makeup.  She became suddenly very real – just one of us.

Ann asked “has everything been discovered? The truth is always the first victim.  People fight over it.”

Upon closing her remarks were “Anything, everything, is not only possible, it’s probable.  No one person has more value than another.  I wish you every luck and be forceful!”