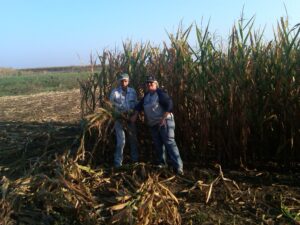 A corn shock is a group of corn stalks tied together.  Tuesday I spent the morning helping chop down corn stalks, put 12-15 of them together in a shock and tied them up with twine.  Then we threw them on the back of the pick up and I headed off to town to deliver them to the local retailers who had ordered them.

Corn shocks now are ornamental and signal the coming of fall.  The Greater Franklin County Chamber of Commerce works (literally) with farmer Dave Miller to make these shocks and bring them to the retailers.

This is just another example of rural living.  You won’t often see corn shocks in big cities in front of the stores.  You will see them in small towns though.  In our town, one of the retailers, Carol’s Flower Box, will go around and pick up the old shocks and take them out to their farm to feed their animals.  Waste nothing!

Originally, the corn was picked by hand and corn shocks were made so the corn and stalks could dry out.  After any remaining corn was picked, the farmer would use the shocks to feed the livestock.  Often the shocks sat out in the fields all year long, and the farmer would use an ax to chop out the stocks he needed.  That changed in the late 1920’s when a picking machine was made and technology began to really change things.

Farm Collector shares this story written by 70 year old Frances Steel in 1970.  “My father and I would take eight rows at a time. I cut four rows and he cut four. He used a regular corn cutter and I used a sickle, which I liked better. We used a wooden horse to lean the corn together between the fourth and fifth row. The horse was a pole about three inches in diameter at the big end and 12 feet long. It was about two inches at the small end. It had two broomsticks for legs at the big end and the small end rested on the ground. And one and a half foot from the large end a hole the size of a broomstick or handle was drilled and a broomstick inserted. This is what the corn was leaned on to start the shock. And when we had cut a space eight rows square, my father would tie the shock. With either rye straw for a band, or binder twine, and as soon as it was tied, I would pull out the broom stick and pull the horse ahead and we would start a new shock. We mostly hauled the shocks in (onto) the barn floor and husked on rainy days or in the evening by lantern light. Major, my dog, would always be around. He loved to eat corn, and there would be mice in the field under the shocks when we hauled them in. And I saw him have a front foot on a mouse holding it down while he killed another one, but (he) never ate one. One man is supposed to cut 100 shocks a day. We never cut that many, and we did not lose any time.”* 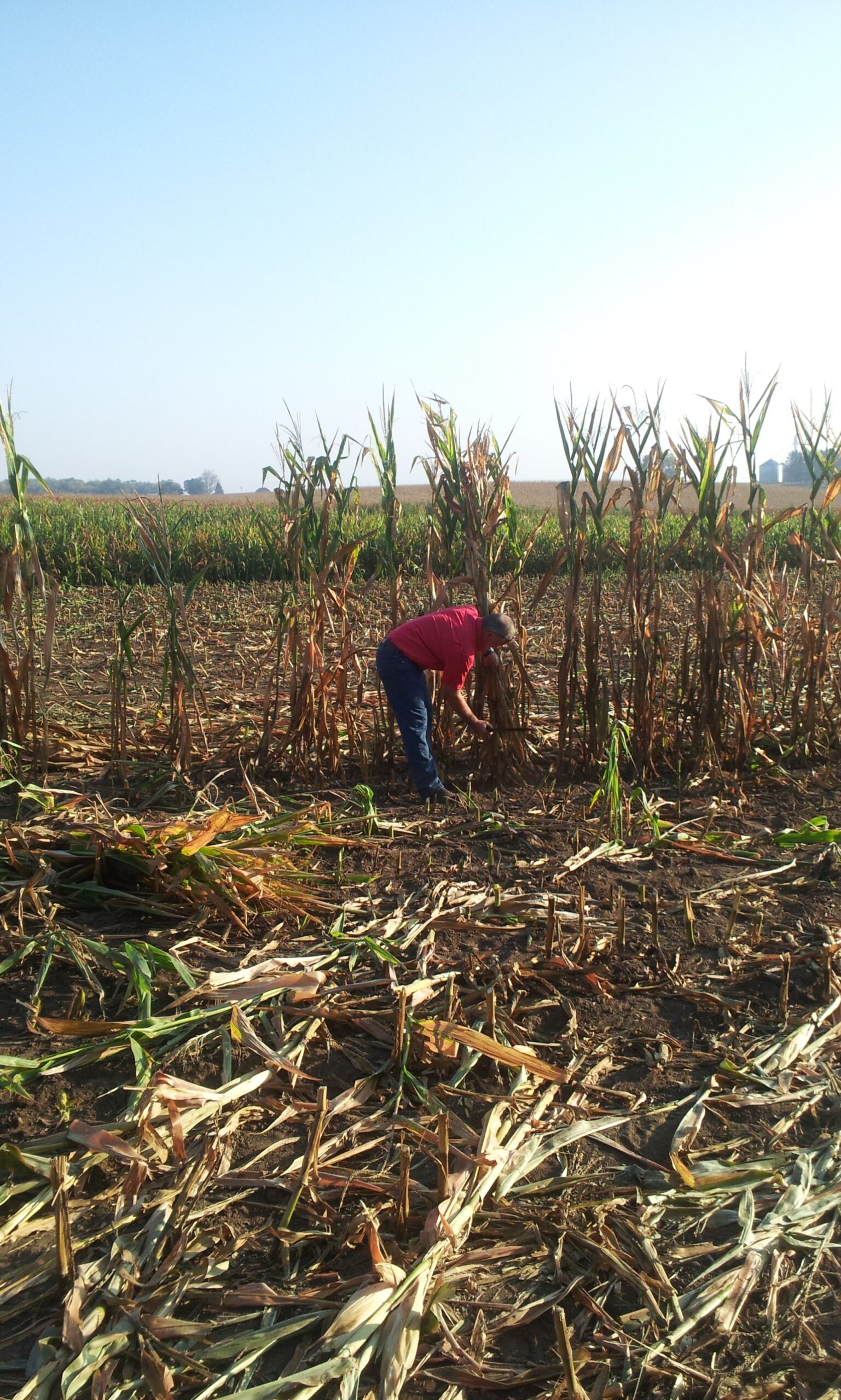 Dave and I, with the help of Brook, took 2 hours to cut and prepare 20 shocks.  Granted, we were talking and Brook and I were total novices at it.  Nevertheless, it is hard, physical work and I am constantly amazed at how technology has made our lives easier!