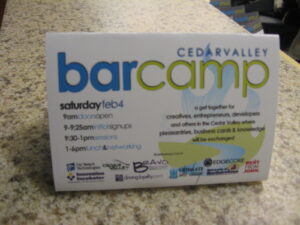 The Cedar Valley had it’s first Bar Camp this weekend.  I stumbled across it on facebook.  $5 got you a tshirt, 1/2 day of presentations/discussions and lunch.

There were 80 people registered, and there were about 50 people there.  They had a good sponsor base too.  Most of the time slots were filled up and divided between, Creative-Technology and Entrepreneur.  I spent most of my time in the Creative room.  I did attend one Tech preso – and found it quite interesting to be in a room full of people who spoke another language than I did (programming and more).  I also led a conversation about the 140 Character Conference, now known as The State of Now, along with the talented creative Megan Pralle.

Scott Kubie talked about how he used storify to create his resume, and how it got a lot of traction.  http://storify.com/scottrocketship/hire-scott-rocketship

A group of Cedar Valley creatives talked about how they join together at http://cvcreatives.us/ and make things happen.  They were also open to suggestions.  I spoke up and said what about those of us close to you?  They said I was welcome to join them.  I’m checking the site out — we will see.  I know they are a creative group of young people. 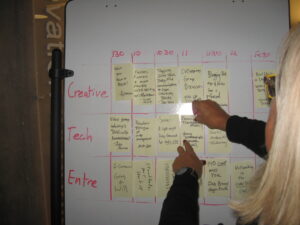 One session was What is your favorite book?  I wondered what that would be about – and it turned out to be pretty interesting.  I got some new titles I want to check out.  They had not heard of Chris Brogan and Julien Smith (imagine?) so I suggested Trust Agents and Flinch.

10% Solution, The War of Art, The Book of Tea, The Little Book, ReWork, Don’t Make Me Think (this one will be first), The Glass Castle, Deep Survival, The Rise of the Creative Class, Self Deception in Leaderships and UnMarketing.

One gentleman suggested we try MarkDown, which is simple text to html program.  I kinda let my brain wander in this preso – and checked my email, facebook and twitter.  Ahh — it happens.

I give the day a thumbs up.  It was also great preparation for the State of Now — I met some new connections!