Advice to a Young Woman 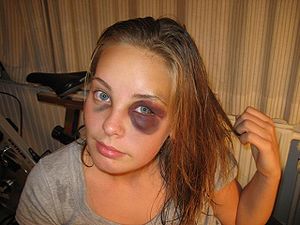 Week One: He’s really cute. He’s got that perfect hair and cute dimple. He holds my hand in public! He makes sure everyone knows we are together. He wants to hear all my conversations with my girlfriends. We do EVERYTHING together. How lucky am I?

Week Two: Maybe he’s right, my girlfriend doesn’t know everything. Why would she want me to not be with him all the time? Doesn’t she know we are in love? He just wants to be with me. We don’t need a lot of friends. We have each other.

Week Three: I didn’t need to go to that birthday party for my cousin. He’s right, making love was a whole lot more fun. My cousin will get over it.

Week Five: Do you think my butt looks fat? He didn’t say so, he just asked were my pants getting tighter. He said he could help me choose the right clothes. He just wants me to look really good. He said I look better without makeup too. He’s going to get me a new cell phone – he took my old one because he said a new one would be better. He said he’d do that today. He promised.

Week Six: My eye is black and blue and I can’t go to work like this. He got so upset when I asked for my phone. I know he’s not made of money, and he works so hard and wants to take care of me. I should have realized that. He didn’t want to hit me, he just couldn’t stand all the whining I was doing. I have to watch what I say, I don’t want to upset him again. He didn’t mean to hit me – it really was my fault. Why can’t I be nicer to him?

Week Seven: I’m really tired. We stayed up for two days straight just talking and making love. We tried this drug he brought home. One of his coworkers gave it to him and said it was meth and would help us be a better couple and get things done. I know I know, but this is really good and I got so much done and we talked over all our dreams and plans. I won’t do it again anytime soon. I’m really tired now. He finally went to sleep, so now I will.

Week Eight: He’s drinking a lot. Says he needs to so he can sleep. We are smoking meth. It’s pretty wonderful – my house is so clean! I don’t work anymore. I got laid off when I had that black eye and they just told me not to come back. I was late a lot. I cook for him. He wants a hot meal when he comes home. I forgot the time on Tuesday cause I was cleaning so much – and I didn’t have his dinner ready. What was I thinking? He twisted my arm hard so I’d see what it was I was forgetting. My shoulder still hurts, but I don’t complain. He’s trying so hard to take care of me. He’s all I have. He loves me so much.

Week Nine: I’m in the hospital. I have fractured ribs, a broken arm and a concussion. I told the ER I fell down some stairs when I tripped over a stuffed animal. I didn’t though. My house is too clean to have a stuffed animal just laying around. He pushed me down the stairs. I don’t even know why. I must have done something wrong. I just don’t know what. I hope he comes and visits soon. He’ll tell me what I did and how not to do that again. He does love me you know.

Week Ten: There is no entry. She is dead. Her father found her in the house dead. They think she’d been up for several days and she had a head injury from being hit with a lamp. The boyfriend is gone and the police are still looking for him.

No one deserves to be abused. Recognize the signs. Know that your self-esteem is the first thing an abuser takes away from you. Get help. Call the National Domestic Violence Hotline at 800-799-SAFE.

Thanks for visiting Debworks! Got a minute? Know anyone who is looking to workshift? I’m interviewing! Visit http://www.debrareneebrown.com
Posted in 100 series, Series