A Town of World Largest … 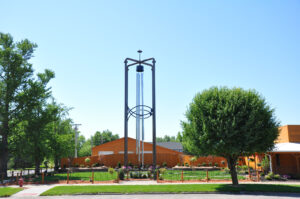 Today we have a guest post from Darlene Dingman.  Darlene is a volunteer at the Wilson Brewer Park Museums and Complex.  On her travels she likes to visit museums!  On her last trip she found herself in Casey, Illinois and shares her visit with us. Her experience proves that one person can make a difference!
I recently visited Casey, Illinois, a small town that has a lot of big ideas.  How can a town one-fourth the size of Webster City have so many “World’s Largest…”? The answer is one man…Jim Bolin, co-owner of Bolin Enterprises, a pipeline construction and maintenance company located in Casey. He wanted to  promote tourism and put Casey on the map, which he certainly did!  First, he constructed “The World’s Largest Windchimes” which is located near the center of town next to a unique cafe that he also built. It took 3 years to construct, is 55 feet tall and weighs 16,932.4 lbs. It was named by Guinness as the Worlds Largest Windchimes in December 2011. Stopping by to ring the chimes, I was surprised to hear a very low but beautiful sound. During high winds and at night, the chimes are “corralled” to protect them and to not disturb the sleep of nearby residents.
I guess he has a lot of time on his hands, because Bolin carved, with chainsaws, the World’s Largest Golf Tee as named by Guinness in January 2013. I was privileged to watch as it was installed with cranes at the Casey Country Club on May 30, 2013 as a way of promoting the golf course and increasing usage. It stands on the 10th green at 30 feet 9 inches tall, with a head diameter of 6.26 feet. It weighs 6,659 lbs.  Rumor has it that they want to install an 18 foot fiberglass golf ball on top and allow players to tee off it. Really????
Not one to rest on his laurels, Bolin next carved the Worlds Largest Crochet Hook, of which there is no current world record holder. It is 6 feet 1 1/2 inches long and 3 inches in diameter, weighing 9 lbs.    He also carved a pair of knitting needles which are both 13 feet 3/4 inches long and 3 1/4 inches in diameter and weigh 26 lbs EACH. In order to be considered for a Guinness record, both implements must be usable.  After Bolin donated the hook and needles to Jeanette Huisinga, the owner of a yarn shop to promote her shop on main street. She crocheted and knitted the appropriate amount of wool on May 20, 2013 for the Guinness judges and is presently awaiting their results.  When visiting at Jeanette’s shop, she told me that once she has acquired 5,000 signatures in her guest book, she will be able to make application for a billboard on Interstate 70 that runs nearby.
As if all the above is not enough, Bolin has already started carving the Worlds Largest Rocking Chair and plans to locate it across the street from the Windchimes on land he has purchased and cleared. I can hardly wait to see that! He seems to be a “one man promoter” of tourism for Casey, Illinois. How lucky they are!